Simeon was born 34 years ago in the former Soviet Republic of Kazakhstan. When Simeon was born, his mother was diagnosed with a severe form of TB. Simeon’s parents were not believers at the time, although his dad had been raised by a Christian mother. But the Lord had mercy on them even at the time of their unbelief – Simeon’s mother got completely healed from TB! Back in the late 80’s Simeon’s dad decided to move from Kazakhstan. He did not want to go to his Christian mother who was living in Komi (Northern Russia) at that time. But the only train ticket he could get was a ticket to Komi! He came to Komi and received Jesus at his mom’s Bible study!!! Later he took all his family to Komi and his wife and 2 boys started attending the local Baptist church. The first time Simeon asked the Lord to come into his heart was at a Christian youth camp in the early 90’s. The camp, by the way, was run by American Christians. We thank God for MISSIONARIES!!! The seeds of God’s Word DO PRODUCE FRUIT!!! Simeon attended church, then served in the Russian Army, and later started working for Christian ministries when in 2001 he found himself on a hospital bed. He had been helping a Christian brother in the Russian city of Kotlas. While starting a wood-stove he used a little gas to start the fire, the gas fumes exploded and he burned himself really bad. Much of his skin was covered with burns. The doctors said that he could die any time. It was at that time when Simeon rededicated his life to the Savior and realized that without God he can do nothing. By God’s mercy he started recovering, and about a year later he was well again, filled with a desire to serve the Lord. So, in 2003 William and Andrey arrived in his hometown and invited him to be part of the ministry. So, since 2003 Simeon has been a great member of the ministry team! The Lord blessed him with many gifts and talents. Simeon is an electrician, a welder, he builds wood stoves, he is a mechanic, he plays the guitar and the piano to worship the Lord! God has been using Simeon a lot to help many people here in Komi. Now he has a wonderful wife (Anna) and three beautiful children (Violetta (5), Nikita (4) and Dimitry (a few months old). 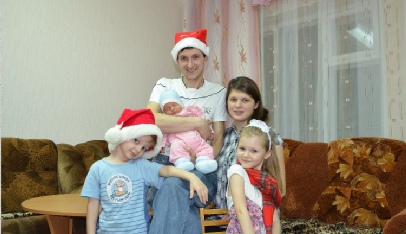